Let the countdown begin.  Give me until Spring to sort it out.  Give me more time with her.  One more flat-planed Fall bike ride, one more Autumn in City Park, one more Halloween, one more Superbowl (ya ‘erd).  One more carol in Jackson Square, one more freak snowstorm, if we’re lucky.  One more Carnival, one more season of stress and release and multiple costume preparation, one more roll in red and black.  One more season of avoiding Jazz Fest and contemplating French Quarter Fest.  A few more levee walks, nights of drinking and dancing, go-cup strolling, porch sitting, more time with friends (ladies, you know who you are).

I’m not done with her yet, but I feel the end coming, can no longer ignore the pull reversed.  I never actually thought it would happen, but there it is.  Reasons, so many reasons.  In the end, family and future, my inability, physically to “go it alone” anymore, my desire to begin to build something lasting.  I see it clearly, just need to make it happen.  I love you, New Orleans, dearly, would still lay down my life for your continued existence, but I know now what the future holds and it’s time, or rather, will be time.  But give me eight months to say goodbye.

It’s true, things are not looking great (financially) right now.  I look for jobs every day, send out countless resumes.  As anyone who reads this might know, it’s not always easy, especially when you voluntarily quit your primary job.  You’re supposed to suck it up, forge ahead and DEAL WITH IT.  But, since leaving, the chest crushing anxiety attacks have ceased.  I no longer deal with that medication, with that issue.  Of course, there is the other issue, the one I don’t really like talking about, but it IS an issue, the gastroparesis (you can look it up, but it won’t tell you everything).  I know no one really understands it, so let me explain just a little.  Imagine you had to eat like a baby.  Imagine you live in an amazing culinary city and you can only eat very little, and only things that are easy to digest (even though, yes, you constantly test the waters to see if you can get away with something delicious. sometimes you pay, sometimes you get by. you just don’t know when a flare-up is coming, especially since a lot of it is tied to your cycle and THIS GIRL hasn’t had a cycle in six months (but that’s a WHOLE other issue)).  When it’s bad (as it’s getting right now), you only eat solid food once a day, when it’s really bad (as I often fear), it’s liquids only.  Oh, and plain water makes you nauseous.  It tends to be worse at night and in the morning, so you have this window of a few hours after you wake up until late afternoon where, if you don’t eat much, you can get some things done.  You feel SO much better when you don’t eat, but you want to eat, you have to eat.  Imagine throwing up almost daily, maybe it’s just dry heaving, but still not pleasant.  And the pain, the pain, when it’s bad is like a wide, tight belt of spikes around your entire mid-section and leaves you immobile, curled around a heating pad.  Now, throw a 9-5 job in there, when your nutrition is out of whack, you’re probably a little dehydrated, and sometimes it’s just hard to concentrate.  And, of course, there’s the depression, because this is NEVER-FUCKING-ENDING and it tends to put a cramp in your social life, and of course, your mental and emotional well-being.  Food is much more than sustenance.

So, I have to make this work, these next eight months.  I have to.  I’m not done yet.  I have to find a way to make art, make it profitable, while working part-time, OR work full-time and maybe, just maybe squeeze in some artwork, when I’m having a good day, when I’m not exhausted, nauseous, in pain, or just blue.

And I hate asking for help, hate divulging my weaknesses and laying all of this out there, but it probably needs to be done.  So, here’s my Etsy store and I do take commissions.   If you wanna see where I’ve sunk all my money and effort for the past two months, come see me at Palmer Park this Saturday (and god-willing, Oct 25th and Nov 29th) from 10am – 4pm.  I’ll be showing under “Holy Crow Studios”, the umbrella for my more whimsical, “accessible” wares.  You can like us on Facebook here. 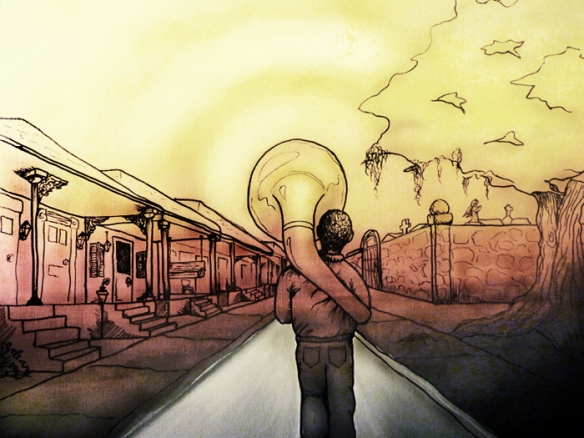 Detail.  Test image for poster (still in progress and taking better photo tomorrow morning when there is better light).

Because it is my birthday.